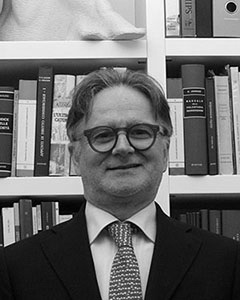 Alvise Bragadin was born in Venice in July 1963. After graduating from Liceo Classico Statale Marco Foscarini di Venezia on July 1982, he went on to study law at Padua University obtaining his degree in March 1988 with a thesis on labor law. He fulfilled his military service in the National Navy.

A member of the Venice Bar Association, Attorney Bragadin is the founder of the Bragadin Law Firm, and his practice has been focused on civil, commercial, corporate and bankruptcy law, sectors in which he also operates as a result of the numerous appointments to bankruptcy proceedings, from the Delegate Judges of the Court of Venice, Padua, Treviso and Belluno.

From 1993 until December 1997 he served as Deputy Vice-Pretore at the District Court of Venice in charge of civil litigation and appeals pursuant to art. 689 law of 1981.

From 1994 to 2000 he was appointed adjunct professor at the University of Venice, Faculty of Economics and Commerce, Chair of Private Law, where he held a course on “Protection of rights” while in 2000 he was the chair of the course ” Consumer protection “. He has also written numerous articles and comments on the magazines such as Il Foro Padano and Diritto dell’Informatica.

From 1994 until December 1996 he was external consultant for the City of Venice, Department of Urban Planning, providing legal advice on zoning matters and other sensitive town planning issues. He also carried out a particular juridical – urbanistic investigation, on the New Island of Tronchetto. Due to the complexity and the bulk of the material examined, this task involved liaising with several councilors of the City of Venice, including Urban Planning and Private Buildings, Transportation, Public Services.

From 1996 to December 1998 he was President of the AIGA (Association of Young Lawyers) Section of Venice, after having served for three years as Treasurer.

From January 1998 until August of the same year, he held the position of external legal counsel at the Special Service Company Idrici Sile – Piave based in Roncade (Treviso) in view of the creation of an internal legal office.

From January 1999 to February 2000 he was the Coordinator of the Veneto Section of the Young Lawyers Association.

Since September 1999 Member and after 2001 President of the Judicial Commission of the first degree regional of the Italian Basketball Federation.

From 2000 until March 2002 Coordinator for the Family Hospitality of Venice “Centro S. Maria Mater Domini” of a pool of professionals for the study, study and dissemination of the Institute of Fostering and Adoption.

From 2003 until October 2016 Member of the Secretary of the Triveneto Disciplinary Committee of the AI.A.

In 2008 he was appointed by the Mayor of the City of Venice as a member of the Venetian Rowing Discipline Commission.

From 2008 to December 2010 Director of the Venetian Civil Chamber.

Attorney Bragadin has a long experience as a mediator and arbitrator.

In 2011 he was a member of the Board of Arbitrators of the Venice Civil Chamber.

From 2011 he qualified as a mediator at the Venice Chamber of Commerce.

In 2013 alternate member of the Board of Arbitrators of the Mestre Chamber of Commerce.

Since 2015 Chairman of the Arbitration Board of General Medicine pursuant to art. 30 of the ANC for the regulation of relations with general practitioners (MG) of 23.3.2005 Regione Veneto.

PUBLICATIONS AND RELATIONS
PARTECIPATIONS IN COURSES